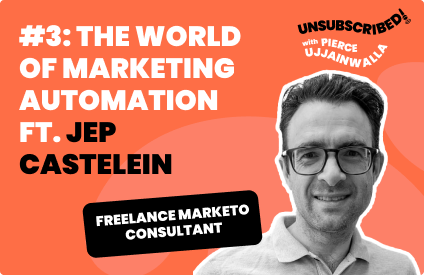 Since getting his first computer in college, Jep knew that he enjoyed the structured nature of technology and how it could be used to solve specific challenges. Jep was working for Salesforce in the Netherlands until an intra-company transfer led him to Silicon Valley. He quickly realized that he was just skimming the surface of marketing automation there, but it wasn’t until he decided to open his own independent consultancy that he really started to dive in.

When Jep first branched out, it was at a time when many people were discovering marketing automation, but not a lot of people were doing it. Between blogging and stints as a guest speaker at conferences, Jep was able to secure a handful of small consulting projects and work with vendors he had known in the past.

Jep then joined Marketo and became one of their most senior consultants. While working there, he started in a business consulting role and then transferred into a more technical role developing customer applications like auto merge.

After Adobe acquired Marketo, Jep struck out on his own again, now with 9 years of experience with Marketo software and a much larger network.

Hear his advice on going out on your own, including:

Tune in for these, along with more of his advice!

Thanks for listening to Unsubscribed! – a podcast created by Knak. If you enjoyed this episode, please subscribe and leave a review. We release new episodes weekly.