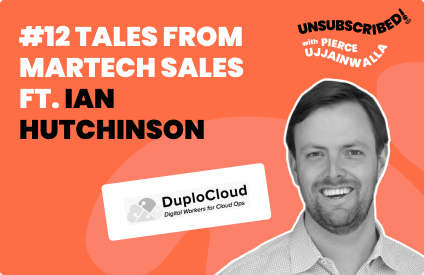 Ian Hutchinson is a fellow Canadian working in Silicon Valley as the Director of Sales at DuploCloud. In this episode, he shares what he’s learned from years in the B2B sales trenches at companies like IBM and Salesforce and breaks down the ins and outs of selling to marketers.

Ian gravitated towards sales because he loved to meet new people and learn new industries, but his love for a good challenge led him to the complex world of technology sales. He likes being at the point where the conversation gets real, and he notes it doesn’t get much more real than the moment when he can put a dollar sign on a product.

Ian credits some of his success in sales to the IBM Global Sales School, where he learned the finer points of sales conversion, discovery, and listening in context. One of the greatest things he learned there was the realization that he may walk into a meeting with predetermined ideas of how the meeting will go, but if the other person has a different plan, his ideas will be irrelevant. As a result, he learned to really listen, keeping in mind that meetings don’t always go as expected.

Ian also appreciated the friendly culture at IBM, noting that even though it was a large enterprise, the culture was such that he could reach out to anyone for help.

After leaving IBM, Ian joined the start-up Vidyard to lead their business development. Vidyard was looking for someone smart and hard-working, and Ian fit the bill. He initially thought he’d be filling a role similar to his position at IBM, but he quickly realized that would not be the case.

At Vidyard, Ian was calling 800-numbers, trying to reach IT decision makers to tell them how to save money on video streaming. Their strategy helped fund the company at its beginning stages, and once the product’s features and functionality had been established, they were able to start targeting B2B companies. Eventually, they began working with media companies and educational institutions before shifting their focus to marketers.

Here, Ian makes some keen observations about bootstrapped companies. He notes that they tend to build what their customers are asking for and then charge the customers for those features while Silicon Valley-funded companies tend to speculate about what features organizations will want. He warns bootstrapped companies about signing a large, multi-million dollar deal with an enterprise and then changing the product roadmap to fit that one company.

After three years at Vidyard, Ian approached the CEO about opening an office on the west coast. When he realized it wasn’t going to happen, he began interviewing in the Bay area – he had more than 30 interviews in 3 weeks – and accepted a position as an Account Executive at Salesforce.

Salesforce is known for their sales and operations best practices, and Ian quickly learned that closing a new business deal is much trickier than boosting an existing deal. He stresses the importance of understanding why an organization is talking to you: if they haven’t bought from you in the last five years, why are they interested in buying now? Understanding the reason why is critical.

He notes that buyers may want a quick buying process, but he advises against rushing through it. For example, if a buyer wants to skip the demo, Sales should take time to hear their thoughts and stress the importance of seeing a demo before making an expensive purchase. He’s noticed that when buyers rush the process, they’re more likely to ghost the sales rep as soon as they get a price.

Ian believes that sales and marketers should walk in each other’s shoes. He encourages them to maintain an open line of communication between departments in order to help marketers get to know customers better and keep the sales team up to date on processes.

“No one is ever going to get mad at a marketer when you say, “I actually helped put together this campaign and I wanted to hear if it was helpful or interesting or feedback that you have” How is that a negative in any way?

In this episode, you’ll learn how to:

Thanks for listening to Unsubscribed! – a podcast created by Knak. If you enjoyed this episode, please subscribe and leave a review on your favourite podcast player.